Looking for some great summer reading books for middle grade kids? Check out 50 of our favorites! You’ll find something in every genre, from fast-paced adventures to sweet coming of age stories. Read on to check them out! 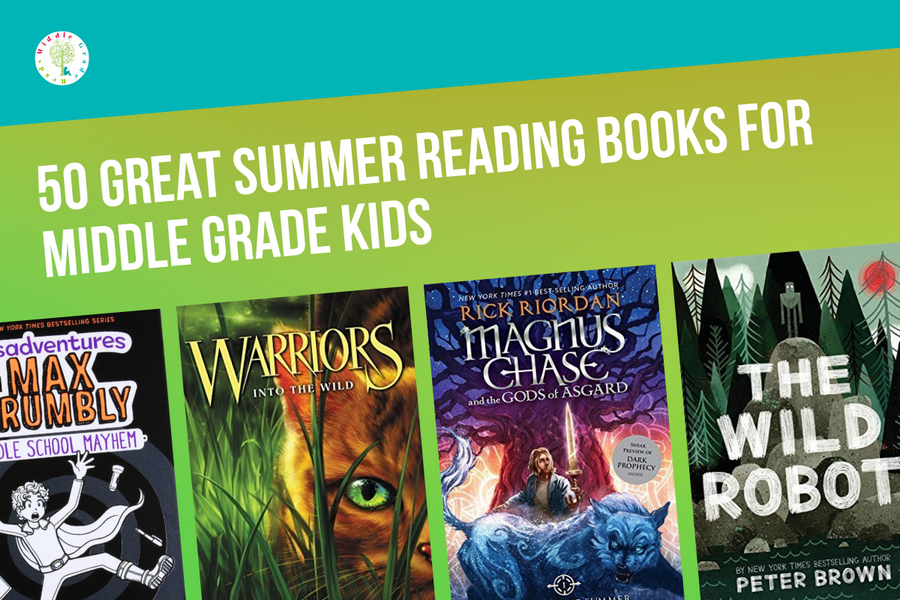 *Affiliate links included below. Thank you for your support!

While most of these books came out within the last couple of years, there are a couple of classics, too! There’s plenty of variety for every reading taste.

My Seventh-Grade Life in Tights

In My Seventh Grade Life in Tights, Dillon just wants to be a dancer. In order to do that, he feels he needs to win a scholarship to a prestigious dance studio. The problem: his dad wants him to play football instead and his other dance pals think studios are for sellouts. While this book is filled with humor and fun, I chose it because I think it sends a good message about following your own heart and dreams.

Find out what happens when nature and tech collides in The Wild Robot, an action-packed survival adventure about a robot named Roz who wakes up in the middle of the wilderness. After a rocky start, she learns she has to rely on her instincts and adapt to her surroundings to make it out, um, alive?

For any child who has ever suffered a loss, Summerlost is there to help get them through. When Cedar loses her father and brother in an accident, she and the rest of her family head back to the town of Iron Creek for the summer. There, Cedar meets a new friend and finds herself embroiled in a mystery that just might help her get past her loss.

More summer reading books that explore loss and the bonds of friendship:

Once Was a Time

Once Was a Time is part time-travel fantasy, part coming of age and part historical fiction. In a war-ravaged England, Charlotte Bromley is sure of only one thing: Kitty McLaughlin. Kitty is her best friend in the world. Yet when Charlotte’s dad makes a huge discovery that the German’s would, quite literally, kill for, Charlotte has to decide between her best friend and staying safe. Her decision triggers some massive consequences, not just for Charlotte, but for the world.

Magnus Chase and the Gods of Asgard Book 1: The Sword of Summer

Magnus Chase is living the life of a street kid after his mom’s mysterious death. Then one day, an uncle he’s never really known comes along and tells him that Magnus is the child of a Norse God. Worse, Ragnorak is imminent, and Magnus needs to track down an ancient weapon to save the world.  The Sword of Summer is book one in the Norse Mythology series.

I love Rick Riordan! His Percy Jackson series is on my list of books every middle grader should read at least once. This series is definitely a very close second! Once you start with the first book, you’ll want to breeze through the others! Even though Riordan has another Gods of Asgard book coming out in October, the trilogy that’s out so far is a complete story. The next book, 9 From the Nine Worlds, is all about the supporting characters and their adventures.

Can you tell this is my favorite category?

Fans of books like Coraline will love The Nest, a creepy Gothic tale about a boy named Steve who would do just about anything to save his baby brother, including make deals with mysterious wasp queens who show up in his dreams.

Pax is the powerful story of a boy and his fox. Yes, his fox. Peter and Pax are inseperable. When Peter’s dad enlists in the military, he insists that Pax be returned to the wild. Yet Peter just doesn’t feel right without his best friend. As he sets out on a journey back to Pax, the fox begins an adventure of his own. Will the two find their way back to each other? I hope so! Jacob recently discovered the Big Nate series, his favorite of which is Big Nate: Thunka, Thunka, Thunka. Fans of Diary of a Wimpy Kids and Captain Underpants will love Big Nate, a 6th grader who has a knack for getting into (and apparently out of) all sorts of crazy trouble. In this particular volume, Nate discovers the cure for all that ails him: an empty soda bottle. I’m kind of wondering if his trick of rhythmically smacking it against his head will work for my stress!

Book Scavenger is the perfect adventure story for kids to start off their own summer reading adventure. Twelve-year-old Emily thinks the best thing about moving to San Francisco is that it’s the home city of her favorite literary genius: Garrison Griswold. Griswold isn’t just any writer, he’s the creator of Book Scavenger (a game where books are hidden in cities all over the country and clues to find them are revealed through puzzles). When she gets to San Francisco, though, Emily finds out her idol is comatose after an attack. Then she and her new friend James discover an odd book, which they come to believe is from Griswold himself, and might contain the only copy of his mysterious new game. They race against time to solve the puzzle before Griswold’s attackers come after them too!

We’ve been seeing a lot of reimagined fairy tales lately, with just about every story getting a makeover. As the title suggests,  Red promises to tell the “true” story of Red Riding Hood. In this version, Red isn’t afraid of the big bad wolf at all. The only thing she fears is magic and losing her grandmother. When Granny gets sick, Red goes on an epic journey to find her a cure, with a little help from a certain blonde girl from another fairy tale (you know, the one that likes to break and enter into bear’s houses).

Harry Potter and the Cursed Child – Parts I & II

Harry Potter and the Cursed Child takes place when Harry is all grown up and his children are in school, 19 years after the 7th book. Harry is having a rough time being an over-worked Ministry of Magic employee, and things aren’t exactly any easier for his son, Albus! He has quite a legacy to live up to.  When past and present collide, Harry and Albus learn that darkness can come when you least expect it.

Check out these other great Harry Potter books: Fans of the show Gravity Falls will love this journal-style book packed full of  monsters and secrets, notes from Dipper and Mabel and the Author’s full story.

The Gutsy Girl: Escapades for Your Life of Epic Adventure

The Gutsy Girl book isn’t exactly a fictional book, but the activities throughout are often accompanied by tales of famous “gutsy girls” who never let anyone tell them that they couldn’t do something just because they were a girl. It’s a fun way to keep your daughter active and laughing this summer.

Check back from now throughout the rest of the summer for more summer reading fun! In the mean time, tell me what’s on YOUR list!